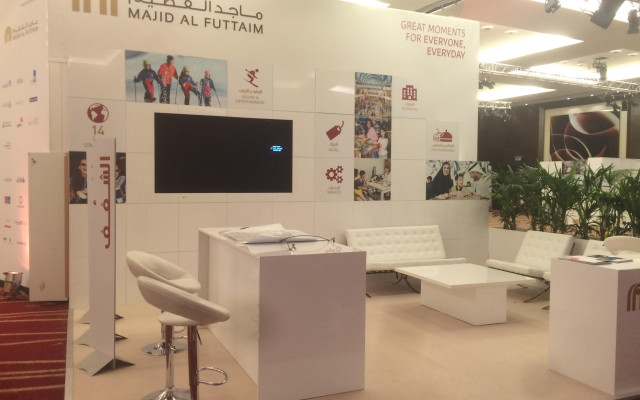 We are proud to have been commissioned again with the creation of exhibition stands at the 3rd annual UAE-UK Pioneers Forum organised in partnership with Majid Al Futtaim.

Held on Saturday, 12th March 2016 at London’s Park Plaza Hotel at Westminster Bridge, the growing careers fair offered 30 stands including ones for BP and the Emirates Group. Over the three years R.S. Sets has won the contract, the projects have also included additional services such as staging for pre-show dinners, a speakers’ auditorium, registration desks, lighting and media houses, as well as eye-catching main sponsors’ stands.

Stands were recreated - from a re-useable bespoke kit system designed by R.S. Sets for the 2014 forum - for the third year, and utilised original and some new digital graphics such as large-scale internal and external auditorium displays.

Attended by members of UAE’s royal family, the UAE-UK Pioneers Forums were created to give Emirati and UK students a chance to interact with business leaders from both the UAE and the UK, and to showcase the career opportunities available within the UAE itself. Abdulrahman Ghanem Almutaiwee, the UAE’s Ambassador to the UK, has commented, “This event… brings together students and the best organisations in the UAE under one roof.”

R.S. Sets was once again tasked by Ivory Worldwide earlier this year with the creation and construction of 27 exhibition stands in just 1½ days for the...read more →

Move to the ‘Green’ Side…

Traditionally, exhibitions have had the reputation of not being eco-friendly. They draw together exhibitors, stands and visitors from across the world racking up their carbon...read more →

Talk to us today about your next project...
Contact Us